With material prices in a state of flux, builders report having good results with cold-formed steel (CFS) framing, which is strong, sturdy and non-combustible.

Excalibur Construction, Inc., Sheridan, Wy., used to order its building materials on a per-house basis. As of May, the firm was ordering materials by the semi-truck, even though bulk purchasing doesn’t solve all supply bottlenecks.

“There are definitely longer wait times for getting stuff here,” says Mykaila Jensen, project manager for Excalibur, in an article on thesheridanpress.com. “You have to wait a couple weeks, and you might not even get all your materials.”

In the Mountain West, where Excalibur Construction operates, wood studs that used to cost between $4 and $5, depending on length, in May cost between $15 and $17, according to Jensen. He says the cost of cold-formed steel (CFS) studs were about half that price, and his company was switching to cold metal framing on many projects. 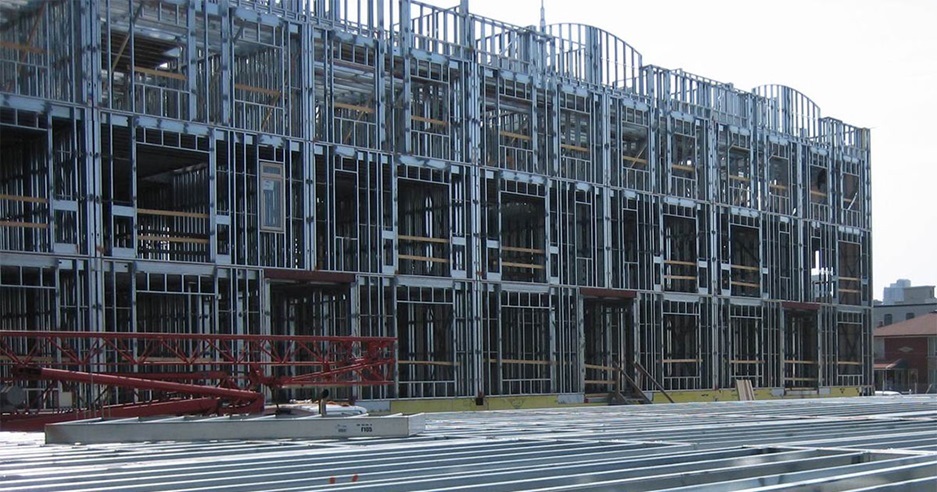 As the price of wood framing increases, contractors are switching to cold-formed steel (CFS) framing on many projects.

The see-saw action of the price of wood during the past year, as well as the limited supply of wood, have made it hard for many construction companies. They’re trying to figure out how to manage their work orders when material prices and availability are in such flux.

“The challenge right now for a builder is, if you’re asked to give someone a price for a home, it’s very difficult,” says Chuck Fowke, a Florida homebuilder, as reported by NPR. “We’re used to having prices change every six months or every 12 months. We’re getting price changes every two weeks.”

And even though lumber mill prices have fallen 48% since May, the NAHB says the prices paid by builders have only declined by a fraction of that amount.

“The disconnect — which has always existed — is inherent to the lumber supply chain,” says the National Association of Home Builders, article, “Why Builder Lumber Prices Remain Higher Than Headlines Suggest.”

In other words, as the price declines began grabbing the headlines the prices of lumber packages quoted to builders have remained at record highs, NAHB says. In supply-and-demand jargon, the prices paid by builders are still “sticky.”

“This dynamic is primarily due to [lumber] dealers’ inventory carrying costs and potentially large differences between the price at which inventory is bought and sold,” the NAHB says.

In addition to the high price of wood studs, the price of sheathing material — oriented strand board, or OSB, a plywood substitute that used to be cheap — is up 97% since the start of the year. In June, OSB traded at $1,527 per thousand board feet — a 97% increase since the start of 2021, according to Bloomberg data.

Josh Kammerer, president of Straight Cold Rollin, LLC, in Sundance, Wyoming, says that OSB has gone from $8 to $80 a sheet in his marketplace.

Steel is strong, sturdy, easy to use

Despite this climate of uncertainty, sources say that CFS-framed projects continue to grow in numbers.

Kammerer, for example, says orders for his company’s steel-framed pole barns sold at a brisk pace since the pandemic began, although sales have declined somewhat of late.

“When wood prices went through the roof, I sold a bunch of pole barns,” Kammerer says. “We were competitive — really competitive.”

He says he’s sold CFS trusses for health care projects, such as a Veterans Administration skilled nursing facility in Buffalo, Wy. Kammerer’s firm also has CFS projects with the Wyoming Fish & Game Department and the Wyoming Department of Transportation.

“We’re doing lot’s of cold-formed steel trusses and cut-to-length steel studs,” he says. “We have a lot of work right now.”

Canadian lumber producers may soon face higher duties as the Commerce Department has tentatively planned to double the duties later this year.

Will wood prices continue to drop as they have since May? That remains to be seen. But some market forces at play, notes The New York Times, relate to the long-standing trade dispute between the U.S. and Canada, a dispute that could send wood prices higher.

“Signs of diplomatic progress [regarding the trade dispute] have been scarce, and Canadian lumber producers may soon face higher duties,” The Times says. “The Commerce Department said last month [May 2021] that it tentatively planned to double the duties later this year, to 18.3 percent from 9 percent for most producers.”

The move was cheered by the American lumber industry, The Times says.