A large, ultra-modern home is being custom-built outside of Toronto, and it features not wood studs, but cold-formed steel (CFS) framing.

“The architect designed this home to have a life expectancy of more than 100 years,” says Fil Capuano, president of Chatsworth Fine Homes. “Resilient products like the steel framing system were carefully chosen to meet that life span.”

Since energy efficiency is also paramount in the build, high-performance techniques are being used to seal the shell tightly, Capuano says. The stability of steel helps with the air sealing, since wood shrinkage could open up air leaks.

The home features a hybrid system that combines structural steel and CFS wall framing. The interior partitions will make use of CFS framing and wallboard.

“The interior will be replete with sleek modern lines and minimalistic contemporary décor,” says the Chatsworth web site. “Large floor-to-ceiling glass brings a modern feeling to the home, with the outdoors embracing [the] inside with cascading light.”

The interior partition frames are being stick-built on site. 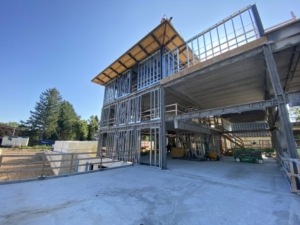 What makes this home a standout? Floor-to-ceiling glass. An eight-car underground garage. Minimalist decor. And, the use of CFS framing instead of wood.

“Not a lot of guys do steel-framed houses around here,” Sliskovic says. “It’s not common to see houses built with steel. This will be my third.”

Sliskovic prefers working with light-gauge steel rather than wood. He says so do others working on the project.

“Everybody prefers it — not just our guys, but also the site superintendent,” Sliskovic says. “And he’s got a residential wood framing background.”

“Believe it or not, he’s completely ‘nuts’ about the steel — that is, he likes it,” Sliskovic continues. “The builder likes it, and I like it, because it goes up fast.”

The steel framing is durable. Sloskovic believes the framing will remain true for the life of the home.

“Those walls and reveals, no matter the finish, will always be straight,” Sliskovic says. “Steel doesn’t warp. It doesn’t twist. The homeowner won’t ever get nail pops. And for sound, it’s just a no-brainer — the walls will be finished next to perfection.”

At the time of publication, Sliskovic and his crew had a lot of work ahead of them. The project is expected to be completed by the end of 2021.