Because cold-formed steel is such a ductile material it provides a higher degree of resistance to lateral loads such as those imposed by seismic or high wind events. It also gives CFS framed wall and ceiling assemblies a higher resistance to uplift and gravity loading.

When Looking to Build a Structure that will Bounce Back from Catastrophe, CFS is the Answer

Resiliency has become an oft-used buzzword in the engineering and construction industries, as building professionals seek methods for countering increasingly intense hurricane activity, wildfires, flooding and other natural events. Natural disasters cost the U.S. $91B in 2018, according to the National Oceanic and Atmospheric Administration, a sign that a growing number of extreme weather events are taking a significant economic toll.

But what defines a resilient building? Put simply, resilience refers to a building’s ability to withstand, respond to and recover rapidly from extreme events in a cost-effective manner. Of course, fortifying a structure against hurricane force winds and minimizing loss from fire present entirely unique sets of design challenges. With so many potential forces at work against a building, it’s important to take a holistic approach to resilient design.

A joint report from the U.S. Department of Homeland Security (DHS) and National Institute of Building Sciences lays out five key attributes that comprise resiliency: safety, security, durability, environment and energy conservation. These attributes are presented as basic requirements for addressing natural and man-made hazards, as well as the environmental conditions of the building’s location. The resilience of the building corresponds directly to how well these attributes enable the building to meet these demands.

Among the numerous strategies for designing resilient buildings, material selection is of particular importance. When it comes to framing, there’s no more resilient option than cold-formed steel. In this article we will analyze resiliency in the context of the built environment, explore the various attributes of a resilient structure, and make the case for why cold-formed steel performs best in each scenario. 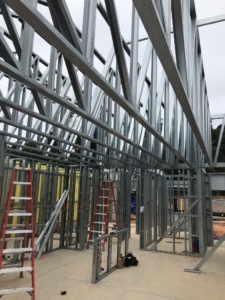 The first attribute of a resilient building is whether it can protect occupants during a life-threatening event such as a hurricane or earthquake. Cold-formed steel has a number of inherent properties that help ensure a building remains intact during and following an extreme event.

Determining a building’s level of protection against an explosive threat can be complicated. The U.S. Department of Defense (DoD) Unified Facilities Criteria (UFC) program developed guidelines to minimize the threat of mass casualties in the event of a terrorist attack on federal buildings, but these guidelines have also been adopted by many private sector projects. Mitigation strategies include maximizing standoff distance, preventing building collapse and minimizing hazardous flying debris. Recent research demonstrates that the overall stiffness and strength of cold-formed steel can be utilized to resist blast threats using conventional construction methods that add little cost to traditional designs.Weather-related events aren’t the only potential threats buildings must be prepared for. Many, such as terrorist attacks, are man-made. The DHS/NIBS report considers blast resistance and ballistics as measures of building resiliency when it comes to security.

Cold-formed steel’s performance against progressive collapse was recently demonstrated in the AIT Barracks project in Monterey, California. The 110,000SF facility was commissioned by the U.S. Army Corps of Engineers to serve as a modernized, private-sector residence. In addition to seismic considerations, the structure was required to adhere to UFC 4-010-01 requirements for blast loading applied to the exterior framing, as well as UFC 4-023-03 progressive collapse requirements.

Progressive collapse is defined by the American Society of Civil Engineers as the spread of an initial local failure from element to element, eventually resulting in the collapse of an entire structure, or a disproportionately large part of it. To meet the UFC progressive collapse requirement for the exterior walls of the AIT Barracks, the project team ran the CFS joist framing from demising wall to demising wall. The end joists at the exterior wall were then designed to support the wall and roof loading above. This allowed for large sections of exterior wall framing to be removed, while still providing vertical support to the structure above. Additionally, structural steel tubes were designed in line with the joist framing at three end locations where the floor and roof were supported by the stud framing, allowing for progressive collapse requirements to be met if the bearing wall below were removed.

The third measure of a building material’s resilience is its durability, or how long it can be exposed to outside elements with minimal wear or damage. A key component of a resilient building is one that is designed to have a long life. Particularly in areas where atmospheric moisture, flooding, or any other inadvertent exposure to water is a threat, cold-formed steel framing can be the difference between salvaging a structure or needing to completely gut and rebuild.

Cold-formed steel is corrosion resistant, doesn’t retain moisture and won’t harbor mold growth. When materials are underwater for any length of time, many are not salvageable when flood waters recede. Cold-formed steel utilizes zinc or similar coatings to boost durability and will last hundreds of years before its corrosion resistance deteriorates.

Of course, any level of moisture within a wall cavity can quickly become a structural and a health problem. Cladding failure or plumbing leaks can also create significant problems within a structure. The EPA states that there is a 24- to 48-hour window to effectively reduce the potential for mold propagation following exposure to water. That time window can be even shorter if the materials used to build the wall absorb and hold water. This isn’t a problem with cold-formed steel, which is inorganic and does not function as a food source for mold. Also, cold-formed steel is dimensionally stable in a moist environment and won’t warp like lumber will when it gets wet, so walls and floors remain plumb and level.

Finally, cold-formed steel is one of the few building materials that is completely impervious to termites and other pests in any climate or building type. According to Orkin, termite damage in the U.S. results in more than $5 billion annually. Not only are these infestations costly, but they can also compromise the integrity of the structure and limit its ability to respond to some of the more immediate events discussed previously in this article.

In addition to offering safety, security and durability, resilient buildings are also judged on their energy efficiency and impact on the environment. Air tightness, thermal transfer and the use of renewable energy all play a part. Environmental impact, which is often defined through Life Cycle Analysis and also encompasses issues such as acoustical performance, is another area where cold-formed steel can really make a difference.

Steel framing contains on average a minimum 25 percent recycled content and is 100 percent recyclable at the end of its life. The Steel Recycling Institute reports that steel is recycled more than paper, plastic, copper, lead and aluminum combined. When structures have to be renovated or rebuilt after a devastating event, using a material that can be reused or recycled is beneficial from a cost, convenience and sustainability standpoint.

The steel industry as a whole has made great strides to reduce the environmental impact of manufacturing CFS products. According to the Steel Framing Industry Association, the U.S. steel industry has reduced energy intensity by 32% and CO2 emissions by 37% per ton of steel produced since 1990.

Once you break down the concept of resiliency and the multiple attributes required to design a truly resilient building, it’s clear that cold-formed steel is a superior framing material choice. Cold-formed steel is strong, durable and can contribute to a project’s sustainability goals. It won’t burn, corrode, or harbor mold growth. It is resistant to pests, offers consistent strength, and boasts ductility and strength-to-weight ratio that make it perfect for resisting seismic and high wind events.

Cold-formed steel has the characteristics to withstand, respond to and recover rapidly from nearly any extreme event. As the industry continues to embrace resiliency, it’s certainly worth considering how you can incorporate this versatile material into your upcoming projects.

Greg Ralph is Vice President of Business Development for ClarkDietrich. He’s actively involved with the Association of Walls and Ceilings International Construction Technology Council and also serves on the Standards Council for the American Iron and Steel Institute (AISI), the AISI Committee on Framing Standards and the AISI Committee on Specifications. In addition, he holds active memberships with the International Code Council and The American Society for Testing and Materials on committees C11, A05 and E06. He can be reached at Greg.Ralph@ClarkDietrich.com.