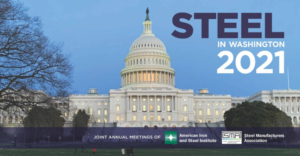 Established in 2007, the AISI Market Development Achievement Awards recognize individuals who have advanced the competitive use of steel in the marketplace.

Haws is an industry veteran. He has worked for Nucor Building Systems, American Buildings Company, AISI, HH Robertson and Midgley, Clauer & Associates. He has had responsibilities with AISI’s Committee on Specifications, Metal Roofing Task Force and Residential Advisory Group. Haws helped launch the AISI Committee on Framing Standards in 1998, which helped set the stage for AISI standards development for decades.

We caught up with Haws to learn how cold-formed steel (CFS) framing has changed over the years and what we can expect to see over the next 10 years.

Rick Haws believes the use of technologies, such as BIM, can make structural analysis easier for engineers.

BuildSteel: What has the AISI Committee on Framing Standards accomplished?

Haws: One of the most important things we achieved was the standardization of steel framing shapes. Each steel framing manufacturer had its own unique studs. It was difficult for engineers to design cold-formed steel framed buildings because steel studs were manufacturer-specific.

BuildSteel: They must have had limiting heights and load tables for their products.

Haws: Yes, but everybody’s tables and stud profiles were different. If you looked at it from a code development perspective, it was difficult to get specific requirements in the building codes for structural applications of cold-formed steel framing.

However, the steel framing industry embraced change. They came up with the standard profiles commonly used in the industry. And I think AISI provided leadership. We worked with engineers and product manufacturers. It worked extremely well.

BuildSteel: How did you handle standardization regarding innovations such as engineered products known as “EQ” or equivalent studs?

Haws: We developed standardized studs approved by the industry and the building codes, and everybody has access to them, but we also developed standardized design and test methods to provide a level playing field for the development of new products. That’s the beauty of cold-formed steel — manufacturers can produce different profiles, and standardization will not inhibit their innovation. Rather, it’s a win-win for the industry.

BuildSteel: With respect to CFS, the 2018 International Building Code shifted from ASTM to AISI standards. Was that a good thing?

Haws: It was a great thing. It was the result of a multi-year effort on code synchronization by the AISI Committee on Framing Standards working with engineers, and the steel framing industry to develop standards adopted by the code and create a singular path for code compliance.

Steel Standards in 5 to 10 Years

BuildSteel: What important areas will affect CFS standards in the next five to 10 years?

Haws: One is energy. The energy codes are becoming more stringent, and the AISI Committee on Framing Standards has developed a new energy standard. The standard will be introduced into the building code soon. We have taken efforts to ensure we have a document that will enable us to meet the energy codes as they change.

BuildSteel: What else do you see happening in five to 10 years?

Haws: Ways to simplify. This includes Building Information Modeling. We’re going to do more modeling as part of our structural analysis as engineers, so we will need to work with and build 3D models.

BuildSteel: What other ways can we simplify?

System reliability is a holistic design approach. It considers the consequence of failure of individual elements and incorporates redundancy into the system. A systems approach would involve four steps:

BuildSteel: So overall, CFS framing is only going to get better.

Yes. We’re trying to make it easier to use the cold-formed steel specification. We are simplifying it, but that’s a difficult task because cold-formed steel is inherently complex and involves more analysis than structural steel, wood and concrete.

Rick Haws of RBH Consulting, LLC, has decades of experience in the cold-formed steel (CFS) framing industry. He has worked for Nucor Building Systems and American Buildings Company. He has been responsible for AISI’s Committee on Specifications, Metal Roofing Task Force and Residential Advisory Group.